The CAWD Wastewater Treatment Plant (WWTP) has a permitted capacity of 3.0 million gallons per day (MGD) of dry weather flow.  Current average dry weather flow (ADWF) is approximately 1.1 MGD which represents 37% of the permitted capacity. Of the 1.1 MGD, approximately two-thirds is from CAWD customers and the remaining one-third is from Pebble Beach Community Service District customers.

During large storm events the inflows can increase up to eight times the dry-weather rates. This requires the plant equipment and processes be designed to handle large hydraulic loads during the winter months.

The purpose of influent pumping is to lift the incoming untreated sewage from the terminus of the several interceptor sewers up and into the headworks from where the sewage can flow by gravity through the other treatment processes. Approximately 97% of the influent sewage is pumped at the influent pump station; the remaining 3% is discharged directly into the headworks from the Calle La Cruz pump station in the Carmel Meadows subdivision.

During power outages, a standby generator automatically provides backup power to all three influent pumps. There is always at least a 7-day supply of fuel onsite to power the standby generator.

The headworks structure, together with the adjacent influent manhole, contains essentially all the pretreatment processes of the plant.  Unit processes located within the headworks are: influent flow measuring, mechanical bar screening, and grit removal and washing.

The mechanical bar screen removes rags and other large solids from the raw sewage and into a hopper which stores the screenings until they are removed and disposed of at the landfill.

Grit (i.e. sand, coffee grounds, etc) is removed from the raw sewage by means of settling in an agitated tank. The agitation keeps the lighter organic solids in suspension and allows the heavier solids to drop out and be removed by pumping the contents from the bottom of the tank into a grit classifier and washer. The grit washer further separates the heavier grit particles from the lighter organic matter and the grit is then disposed of into a bin for disposal at the landfill. The lighter organic matter is returned through a pipe overflow back into the grit tank.

The Primary Sedimentation tanks remove the majority of suspended solids from the wastewater by gravity settling. CAWD has two primary sedimentation tanks for redundancy. Each tank has a mechanical scraper which rotates around the sloping bottom and pushes settled sludge to a sludge thickening zone and a sludge sump. Sludge is withdrawn from the tanks and is transported to the anaerobic digestion tanks. Floating matter is mechanically skimmed into collecting hoppers and is also transported to the anaerobic digestion tanks.

The primary sedimentation process is basically a physical process utilizing gravitational forces. Settleable and suspended solids, which are the major components of sludge and are heavier than water, settle out of the sewage along with any grit carryover from the headworks. Scum, which is lighter than water, floats to the surface and is removed by skimming. Approximately 60 to 65 percent of the suspended solids will be removed by gravitational forces as part of primary sedimentation.

Effluent from the primary sedimentation tanks overflows into double sided circumferential launders and then flows into the aeration basins.

The aeration structures (basins) are designed to promote the growth of helpful bacteria organisms which consume the nutrients in the sewage. This is called the "activated sludge" process. By injecting large amounts of oxygenated air, these bacteria thrive and consume the biological oxygen demand, ammonia, carbohydrates, fats, etc. in the sewage and convert it into bacterial mass or "sludge" for removal in the Secondary Sedimentation Tanks.

The aeration structures can hold about 1.15 million gallons total dived into three separate basins. The helpful bacteria population is maintained in the basins by returning a portion of the sludge separated out of the water downstream in the Secondary Sedimentation Tanks back to the front of the Aeration Basins. This allows the helpful bacteria to live out their life-cycle in the treatment process, all the while providing a beneficial service to the treatment process.

CAWD utilizes different zones in the aeration basins, some with oxygen (aerobic), and some without oxygen (anoxic/anaerobic). The different zones allow for selecting the types of bacteria that are the most beneficial and to enhance the nitrification process.

Aeration in each basin is accomplished by air blowers feeding fine bubble diffusers at the bottom of each basin. Air flow is regulated by automatic dissolved oxygen (DO) control systems.

The Secondary Sedimentation Tanks are similar to the Primary Sedimentation Tanks except they are designed to remove lighter suspended solids. There are two tanks, each equipped with rotating mechanical sludge and scum collectors. The effluent from the Aeration Basins enters each tank through the bottom, rises up through the center column, and then is distributed into the sedimentation zone. Settled sludge is removed from the tank and clean water flows over weirs to the next step in the process (disinfection). The sludge is pumped back to the Aeration process to maintain the helpful microorganism population, or wasted to the solids treatment process. Scum is collected from the surface of the wastewater in each tank and returned to a sump in the Aeration Structure, from which it is then pumped to the solids treatment process.

The clean water coming out of the Secondary Sedimentation Tanks is clear and has very low concentrations of bacteria and ammonia. The water is so nice it is common to see ducks enjoying the water in the clarifier! Disinfection/Dechlorination is next, and is the final treatment step before this water is sent to the Reclamation Facility or to the Ocean.

The final step to clean the water is disinfection/dechlorination. Disinfection is accomplished using liquid chlorine (i.e. bleach) which kills bacteria and deactivates viruses and protozoa that may be harmful to human health. A small concentration of chlorine is maintained in the water for about 2 hours to make sure all of the harmful pathogens are killed or deactivated. The residual chlorine is then removed using liquid sodium bisulfite. At this point the water is safe to send out to the ocean, but most of the time it is sent to the Reclamation Facility for further treatment to allow the water to be reused for irrigating golf courses in Pebble Beach.

A pipeline carries the treated water or brine to the ocean. The existing ocean outfall is a 24-inch diameter, concrete encased pipe with 10 diffuser ports along the pipe. Each port has a rubber “duckbill” type valve to prevent debris from entering the outfall pipe during periods of low flow. The diffusers are designed to quickly disperse the treated water into the receiving water so that there is no environmental degradation around the outfall.

There are several individual processes that are utilized to handle and treat the solids generated from the wastewater treatment process. These are: Sludge Thickening, Anaerobic Digestion, and Dewatering.

The lighter sludge generated by the Secondary Sedimentation Tanks and the Microfiltration Membranes (Reclamation) are sent to the Dissolved Air Flotation Sludge Thickener to thicken the sludge before sending it to the Anaerobic Digesters. This is not required for the sludge from the Primary Sedimentation Tanks which is already thick enough to send straight to the digesters.

Thickening is achieved by adding fine air bubbles into a tank containing the light sludge. The air lifts the sludge particles to the surface so they can coalesce at the surface and be skimmed off in a more concentrated/thick state. This thicker sludge that is collected is sent to the Anaerobic Digesters. The liquid that the solids are separated from is returned to the Headworks to be treated again through the plant.

A byproduct of the anaerobic digestion process is methane. CAWD uses the methane produced to generate electricity using two microturbines. The microturbines can produce about 15% of the power demand required by the wastewater treatment plant (not including the Reclamation Facility).

After the solids have been stabilized sufficiently by the digestion process the solids are held in a holding tank before they are sent to the dewatering equipment.

Dewatering is a physical/mechanical process used to reduce the moisture in digested sludge (biosolids). There are several reasons for dewatering sludge. In general, it is more economical to dispose of the dewatered sludge than it is to pump or haul liquid sludge to disposal sites because by reducing the moisture content, the sludge volume and weight are reduced.

The CAWD plant uses a belt filter press or a screw press to dewater the digested sludge. This equipment presses out the moisture from the sludge to create a dry material that is essentially dirt that can be land applied.

The dewatered sludge is hauled by truck to Kern County where it is used as a compost amendment for non food crops. 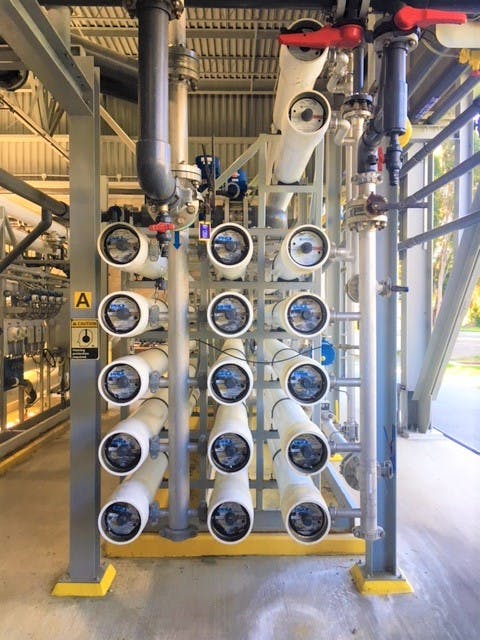 On an average day about 90% of the water that comes into the CAWD wastewater treatment plant is reclaimed and sent to Pebble Beach golf courses for irrigation. CAWD owns the Reclamation Treatment Facility which is a part of a larger project including storage and conveyance infrastructure that was created in partnership with the Pebble Beach Community Services District (PBCSD), and the Monterey…

Sign up for updates from Carmel Area WasteWater District

Carmel Area WasteWater District is fully committed to providing accessible facilities, elements and channels of communication to all members of the public. As part of this commitment, Carmel Area WasteWater District has a policy of providing an accessible website compatible with the Web Content Accessibility Guidelines (WCAG 2.1) and commercial screen reading software. All features of the website are coded to allow individuals with vision and other impairments to understand and use the website to the same degree as someone without disabilities. We welcome feedback and can often resolve issues in a timely manner if they arise.

If you need any special assistance or accommodations

In addition to testing with users with a wide range of disabilities and coding our website to WCAG standards, Carmel Area WasteWater District regularly scans its website to ensure ongoing compliance, and makes timely changes to any inaccessible changes, if any are found. In our ongoing commitment to transparency, we make the last three months' reports available to the public.

Please note that this site may link out to third-party websites, such as state or federal agencies, that do not have accessible content. This site may also include documents provided by third parties included in our agenda packets, for example. While we cannot control the accessibility of content provided by third parties, we are happy to assist any member of the public with reading and accessing content on our site.

See an opportunity for us to improve? Please contact our accessibility officer or call us at 831-624-1248.

We are committed to your ability to access all content, and we will respond to all requests as soon as possible.

Thank you for reporting this accessibility issue. We'll be in touch soon.
There was an error saving your report. Please make sure you have entered all required fields and try again.
This site is protected by hCaptcha and its Privacy Policy and Terms of Service apply.